I’ve been a bit on-and-off this week, but have managed to keep pretty much on schedule for creating the small assets that will populate the interior of the Fool’s Tent.

As Robin Hobb’s writing says, I want the tent interior to be dimly lit, intimate, and cosy. A totally different world to the exterior. I feel like I am really failing at this, and it’s very frustrating. I’ve been playing with lighting and post-processing to try and achieve something close to what I want, but it doesn’t seem to be going anywhere. The shadows are black, which I really don’t want, and the whole thing just has this nasty sepia tone to it;

I mean, I wouldn’t stay there.

I think the noisiness of the tent walls might not be helping too much; though it looks how I want externally, it’s just making the interior a bit overwhelming. I’m not really sure how to continue forth with the lighting, so I will be making a post on Polycount for help. Additionally, to make the tent really pop from the outside, I have to crank up the lighting really high inside and then bring the brightness back down using the auto-exposure post process settings. I think it’s washing out the interior a bit.

The scene exterior hasn’t changed except for a little with regards to lighting. I wanted to illuminate the rocks more, as I’m quite pleased with them and don’t want them to just be totally in shadow. I’ve also added some post-processing tint to make the scene feel a little more purple and less green/blue, which was a bit sickly in my opinion.

It’s very difficult to get good screenshots of this diorama due to the particle effects; in the editor, more distant particles fade out, whereas in a high-res screenshot, they all seem to be rendered and it looks very over the top. In-game there is less particley-ness going on.

Last Wednesday, which I didn’t mention last week, I made a rare appearance at university for a lecture on portfolios from Ben Keeling and Rich Carey at Creative Assembly. I’d put my portfolio forward for a review and they agreed to use mine along with a few other guys. It was great to get some actual tailored advice on my portfolio, and they were so surprisingly positive I genuinely thought they were kidding for a moment. I had some advice on which pieces to chuck out, so I need to get on that ASAP really, along with sorting business cards.

I also talked to Craig on Wednesday, who took a look at my dioramas and ran through what he liked/disliked about them. He really likes the purple-pink flowers in the Dragon Garden, and I totally agree that they really help the piece come together, though I’m still very dissatisfied with it.

He feels that the Fool’s Tent at first glance is very anti-climactic after the busyness of the other two, and I also agree with this. I don’t think the tent interior is going to remotely make up for that either. We talked about the potential of adding ice, which I had considered and mostly written off. In the books I’m working from, there is a dragon buried in the ice of the glacier they are camping on- it’s why they’re there. We feel that, if I had time, I could explore ways of incorporating that to add interest and mystery to the diorama. The most obvious way would be to have it silhouetted in the centre area of the diorama; 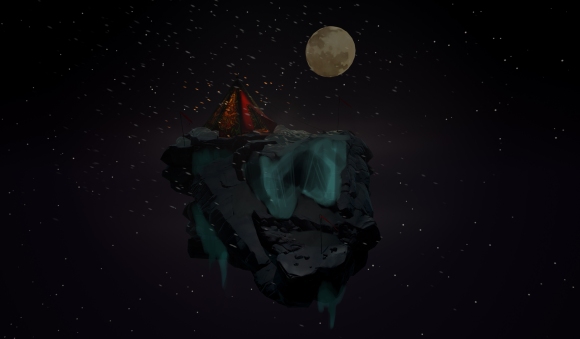 Craig’s given me a tutorial on creating an ice shader which I could use should I choose to do this, however I have a couple of problems with this idea; Firstly, I don’t really want to remove the rocks from the centre of the diorama because I’m quite happy with how they look and I spent quite a lot of time on them. Second, this could be something quite time-consuming that I decide to do, only for me to decide it isn’t working. Therefore, I’m going to keep is as something I do later if I feel I can spare the time. I really think it’s a fantastic idea to improve the diorama. I just wish I could feel confident that it would work.