While things are quiet with diorama number 2; The Dragon Garden, I thought I’d make a post about what I’ve learned from The Fool’s Room, what I’ll be taking forward, and my plans for polish time. I’ll do another, final post mortem, at the end of the project. It’s always good to sit back and consider things at regular intervals until then though. There is definitely a lot I want to mention to perhaps validate some of the choices I’ve made, and to reassure you that the mistakes you probably see will be fixed (hopefully!). 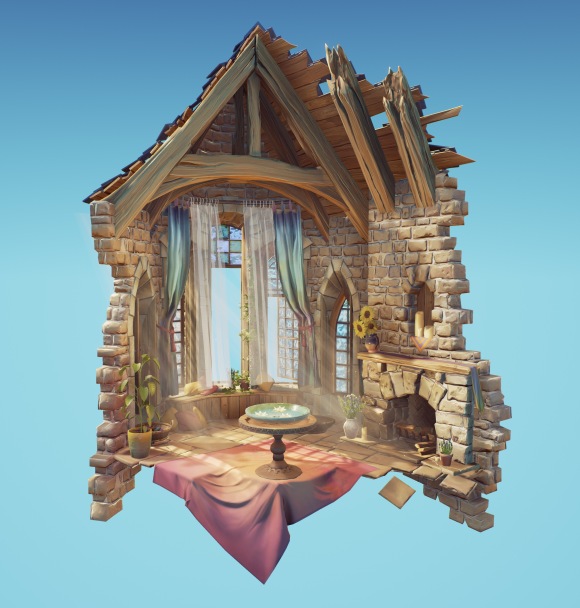 So… there is is as it stands… I feel ok about it. I mean, it’s probably one of the best 3D pieces I’ve produced, but I’m not overwhelmed with pride at it for some reason. I’m super pleased with the overall atmosphere. Playing with settings I’ve never used before really helped to push the project in the direction I wanted, and I wish I’d known about them for past projects. There’s still a lot to do though and things that just feel off right now, but with 4 weeks after the completion of my 3 dioramas scheduled for painting and polish time, I’m feeling confident that I can implement these changes with ease (timewise, at least).

What I’ve learned on this diorama is going carry through to my next two, and I know for sure that I’m really going to improve my workflow as a result. Not only have I learned soft skills such as time management, but also how UE4 behaves, certain sneaky tricks to make things look better, improved lighting, how to make materials I had been scared to attempt in the past, making tilables in Zbrush… so much. Members of Polycount have been particularly helpful with their critique.

Whereas in past projects I always felt like I was being brutally beaten over the head with my inability to manage my time, and that was the main thing I was learning/struggling with, for this diorama time has been well planned and I have no qualms about getting things done. Rather, I feel like this project has, finally, become a journey for my skills as an artist. I’ve gone from the badly lit, early stages of my diorama, to something much more satisfying even with all it’s current problems. Finally finally, I’m learning the ins and outs of softwares, creating better textures, better lighting, even better concept art. It’s great.

There’s a lot I’m really happy with. My favourite bit, of all things, is the top of the diorama around the window frames. I just love the way the AO and the different forms have created just the exact feel I was going for when I decided I was going to go with this art style. I probably sound crazy. But it just looks perfect. Exactly what I wanted. If only I could recreate that everywhere else.

The main thing I’m unhappy with at the moment is the overall brown-ness of the scene. With the brown wood, ceiling, walls and floor, and also the shutters, table, various other bits, it’s a bit overkill. This is one of the big things I hope to at least slightly change not only by modifying the materials themselves, but also by perhaps adding some ivy climbing up the diorama sides for more colour, and adding a tapestry or two to the wall. This will hopefully bring back in the subtly colourful feel to the scene that I wanted to achieve, rather than it being a brown canvas with a bit of colour thrown in there.

While I’m super happy with a lot of stuff, it feels like there is even more I want to rectify. I’d feel ok about handing this in as it is. But only ok, and I want to be so proud of myself when I show this at degree show and hand it in to be marked. There are a million niggly things I want to deal with both as a result of my own judgement and from critique. 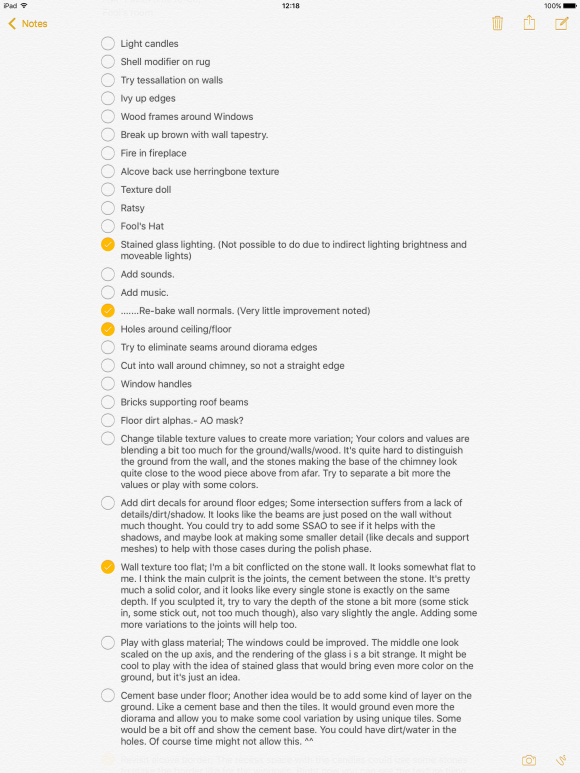 Some things are more important than others, some things are a maybe. There are a few things that I need to do before I start making all the other more cosmetic changes on my list. For instance, there’s an asset (the doll) that is currently untextured. So that’s my priority. There are a few things I want to test but I’m not sure how they’ll look, tessellation on the walls being one of them. I’m not sure if  it’ll improve the wall much, but if it does I’ll stick with it because that wall texture is still looking flat and it annoys me. Fire in the fireplace and lighting the candles is another example, as if they’re there some would say I might as well use them to their full potential. The reason I haven’t added fire to either if because the scene is day-time so I thought there wouldn’t be any need. I still feel that way, but it’s always good to just see what I’m missing out on.

The main things I want to get done to improve the scene are;

They are the big, potentially more time consuming ones that I feel it is important to work on. It’s perhaps 4 days work? Maybe less? Then I think I’ll feel less uncomfortable when people are looking at my diorama and I can see all these errors and oh it’s so horrible hoping they don’t notice too. After all that will come the sound effects, which I’ve already found and I need to perhaps edit a little and put into engine. Hopefully it won’t be a total mission, but I’ll be factoring in plenty of time just in case.

If I get all the main important things done for all 3 dioramas, I have some assets I would also like to make to improve storytelling in the scene. The Fool’s Room is a tough one to create a visual story, I found. It’s a room that is only entered once, and for the briefest period. The character you are following, FitzChivalry, literally enters the room, stays a moment, and leaves again. The room is also shown so early in the books that all the weird and wonderful things you learn about the occupant (the Fool) have not yet surfaced. I wanted to add some easter eggs of some sort to make the scene more interesting, particularly for people who have read the books… but it’s a difficult diorama to do this in. All the same, there are a few things I have thought of; a jester’s hat and sceptre, as the occupant is the king’s fool. This would just lay down the foundations a little better for who lives here. And then also perhaps a weasel hiding in the rafters or some such (don’t ask how it got there), as one of the more secretive characters has a weasel who roams the castle.

Ultimately, I’m really happy with where this is going. Just a few bits to do and I’m sure I’ll feel much better. It’s going to be good to not have to look at it for a while first though. Maybe I’ll see even more problems to fix in 10 weeks time!

For now, onto the next diorama.